x
by adelinekoh
on 1 April, 2014
under Uncategorized
tagged MLA
∞ Permalink 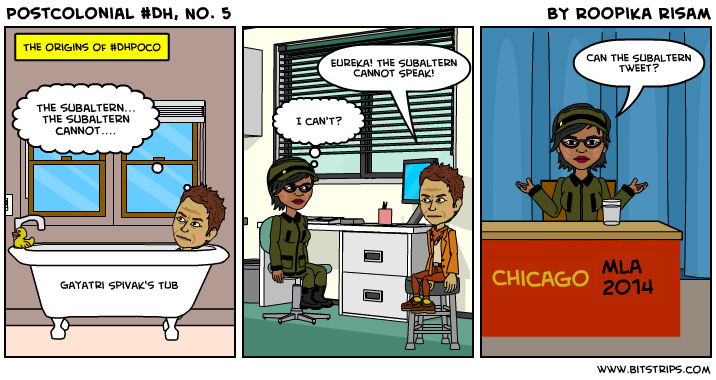 Edited: July 18, 2014: This panel has been selected as part of the Presidential Theme for MLA 2015, “Negotiating Sites of Memory.”

Edited: Unfortunately, Suey Park and Angel David Nieves will not be attending the MLA. Eunsong Angela Kim will be presenting in their place.

Below is our submission for a Postcolonial Digital Humanities roundtable at the Modern Language Association at Vancouver, B.C. in January 2015. The roundtable will be presided over by Adeline Koh.

This roundtable explores the role of praxis in the academy by bringing together two fields that developed in seemingly unrelated trajectories within the humanities in the 1980s: postcolonial studies and the digital humanities. Postcolonial studies draws on continental theory and philosophy to probe the power dynamics that shape the relationship of colonized people to history and culture while the digital humanities integrates the study of the humanities with digitization and programming. Yet, over the past thirty years, the fields have intersected in surprising ways. Postcolonial scholars such as Deepika Bahri and George Landow used web technologies of the 1990s to advance the field, through early sites like Postcolonial Studies at Emory and the Postcolonial Literature and Culture Web as a form of academic praxis.

Intersections between theory, praxis, and the digital have been further explored by scholars of race and new media, such as Lisa Nakamura, Peter Chow-White, Pramod Nayar, Anna Everett and Alondra Nelson. Their work has begun articulating the relationship between race and technology, topographies of power in digital spaces, and the implications of globalized labor that place the burdens of producing technology in the hands of black and brown female laborers.

Roundtable participants, including senior and junior scholars, activists and librarians, will discuss how they actively integrate the methodologies of postcolonial analysis into the digital humanities, revealing the implicit presence of race, ethnicity and systems of exclusion. Participants further discuss how they drawing on the digital humanities’ commitment to praxis, building and exploration of social media and new publishing platforms to disseminate research.

There is substantial interest at the Modern Language Association annual meeting to further these discussions. Related panels at the last two MLAs (MLA 2012: “Representing Race: Silence and the Digital Humanities” and “Accessing Race in the Digital Humanities’; MLA 2013: “Decolonizing the Digital Humanities”), all resulted in full rooms. This roundtable goes further to crystallize these conversations by elaborating what the “praxis”–the actual political practice of postcolonial digital humanities could look like.

Our conversations hinge on a set of questions:

What does a politically inflected digital humanities praxis look like?

What is the role of activism in the postcolonial digital humanities?

How can social media be most effectively leveraged in postcolonial digital humanities praxis and activism, and what are its limits?

Is postcolonial digital humanities an imperialist project because of its beginnings in the United States, and how can this be mitigated?

How can scholars of postcolonial studies and digital humanities better account for the needs, representations, and legiblities of vulnerable populations?

This roundtable presents seven participants limited to five-minute remarks on the praxis of postcolonial digital humanities. The goals for the remarks are to stimulate conversation between the audience and the roundtable. We are reserving 40 minutes for discussion.

Roopika Risam will discuss the relationship between pedagogy and praxis. She will outline a theoretical framework for what she terms “postcolonial digital pedagogy,” a set of teaching practices that engage technology to decolonize the classroom and orient students towards significant learning experiences that extend the scope of learning beyond curricula and institution walls. In doing so, she proposes that the intersections of pedagogy and technology are a fruitful locus for engaged praxis.

Eunsong Angela Kim will examine the political discourse around “trending” and “tagging.” She will examine the leftist discourse of surprise and dismay at certain trends—specifically #solidarityisforwhitewomen and #cancelcolbert. Criticism of the tags situated the trending of such conversations to be an exceptional and a misdirected, mis-use of digital energy by racialized and gendered users. Utilizing Zeynep Tufecki’s analysis on the politics of twitter algorithms, she will contextually examine the function of a trend alongside the potential deployment of intimate sabotage (Spivak) in postcolonial tagging.

Siobhan Senier will give a brief overview of current trends in the digitization of indigenous heritage materials; explain the theoretical underpinnings of projects that seek to enlist tribal communities in co-curation of their source materials; and detail the challenges currently faced by tribal museums, archives and libraries who want to conduct their own independent digitization projects.

Porter Olsen’s talk explores the relationship between contemporary hacktivism and the anti-imperial movements of the early to mid 20th century. Looking beyond the hackers and hacktivist that dominate western newspapers, he outlines the otherwise obscure history of hacking and hacktivism in the global south, and how that history has led to the figure of what he calls the “postcolonial hacker” in novels such as Hari Kunzru’s Transmission and Lauren Beuke’s Moxyland, showing how hacktivists of the global south—both fictional and real—reframe the work of anti-imperial thinkers such as Frantz Fanon for our era of globalized neocolonialism.

Alex Gil argues that the early career of Aimé Césaire marks a moment in the history of the transatlantic region when existing publishing networks open up to new racial dynamics, particularly within the American Hemisphere. In this presentation he shows how the use of computational approaches can help us generate new understandings of the formation of a new anti-colonial republic of letters, and serve as the base for creating the postcolonial digital edition of the future.

Adeline Koh is Associate Professor of Postcolonial Literature at Richard Stockton College. Her work spans the intersections between postcolonial studies and the digital humanities, 19th/20th Century British and Anglophone Literature and Southeast Asian and African studies, and games in higher education. Koh directs The Stockton Postcolonial Studies Project , an online magazine of postcolonial studies and is the designer of Trading Races, an elaborate historical role playing game designed to teach race consciousness in the undergraduate classroom. With Roopika Risam, she co-directs Digitizing ‘Chinese Englishmen,’ a digital archival project on 19th century ‘Asian Victorians’ in Southeast Asia, the postcolonial digital humanities website, and is co-writing a forthcoming book on #DHPoco. She is also a core contributor to the Profhacker Column at the Chronicle of Higher Education. She has held a Duke University Humanities Writ Large Fellowship and a postdoctoral fellowship at the National University of Singapore.

Roopika Risam is an Assistant Professor of World Literature and English Education. She is the co-founder of Postcolonial Digital Humanities (#dhpoco), a movement that foregrounds global explorations of difference within cultures of technology. Along with #dhpoco collaborator Adeline Koh, Roopika is co-writing a book on postcolonial studies and digital humanities. Roopika is the co-director of The Harlem Shadows Project, an experiment in producing digital critical editions of public domain texts, with Chris Forster, as well as co-director of Digitizing Chinese Englishmen, a digital archival recovery project, with Adeline Koh. Roopika’s research interests span postcolonial, African American, and Black British literary and cultural studies, as well as digital pedagogy and secondary education teacher preparation. Roopika is a member of the Executive Council of the Association for Computers and the Humanities, the founding editorial board of DHCommons, and MLA Delegate Assembly.

Eunsong Angela Kim is a graduate student at the University of California, San Diego. Her dissertation examines the politics of appropriation in American  visual and literary production, by specifically looking at the aesthetic function of property. She has been a teaching assistant in the Culture, Art and Technology program and in 2012 was awarded the Barbara and Paul Saltman For Excellence in Teaching. Kim’s writing on contemporary art, poetry and digital humanities has appeared or will be forthcoming in:  The New  Inquiry, AAWW’s The Margins, Model View Culture, Minnesota Review, Iowa Review,  Seattle Review, The Denver Quarterly and others.

Siobhan Senier is Associate Professor of English at the University of New Hampshire.  Her current research and teaching interests include Native American Studies, Digital Humanities, Sustainability Studies, and Disability Studies.  As the present holder of the James H. and Claire Short Hayes Chair in the Humanities, Prof. Senier is working with regional Native communities on the website, Writing of Indigenous New England (https://indnewengland.omeka.net/). Her publications include Voices of American Indian Assimilation and Resistance (2001) and the forthcoming Dawnland Voices: An Anthology of Writing from Indigenous New England.

Porter Olsen is a Ph.D. candidate in the English Department at the University of Maryland. His research focuses on the intersections between postcolonial literature and digital cultures, with a particular interest in how both fields deploy virtual spaces as spaces of alterity and resistance. Before returning to graduate school, Porter worked as product manager for a Linux distribution developer where he was a member of the United Linux initiative, an initiative designed to create a single Linux platform shared among distributors from Germany, Brazil, the U.S., and Japan.

Alex Gil currently works as Digital Scholarship Coordinator for the Humanities and History Division of the Columbia University Libraries. Current projects at Columbia include the re-skilling of subject librarians, a large data-mining project of a million-plus syllabi, a project to crowd-source marginalia, and other digital humanities initiatives. He finished his PhD at the University of Virginia’s English Department, where he worked to develop technologies to analyze and visualize intertextuality in medium-sized corpora to elucidate cultures of reprint in the American hemisphere. He is currently also co-editor of the Critical/Genetique Edition of Aimé Césaire’s Complete Works.