This week, we are proud to be featured on Colorlines making tribute to Chinua Achebe.

Akiba Solomon writes:  “It’s no surprise that Adeline Koh and Roopika Risam are big fans of Chinua Achebe, the Nigerian author of “Things Fall Apart,” who died last Thursday at 82. The creators of the Post Colonial Digital Humanities (DHPoco) website and Tumblr, have been making Bitstrip comics that celebrateanti-colonial writers like Achebe, defang academic jargon, and call BS on the notion of colorblind coding.

Koh (right pane, avatar in the gray pantssuit) is a faculty fellow at Duke and a postcolonial literature professor at Richard Stockton College. Risam (right pane, avi in red shoes) is up for a doctorate in English at Emory and she’ll teach at Salem State University in the fall. With their hands in tech and literature, the pair is also campaigning for people of color and women to write Wikipedia entries about anti-colonial and feminist women theorists from across the globe.” 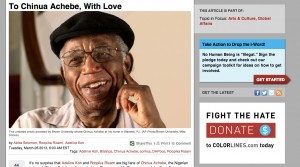