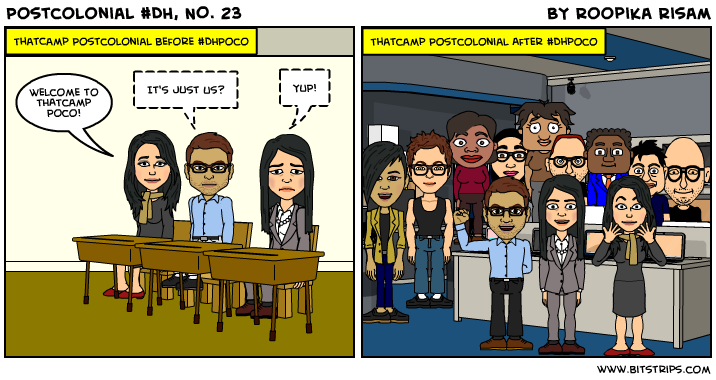 The Postcolonial Digital Humanities website emerged organically over the past few months from a set of conversations that took place between us and a few colleagues on Twitter, in person, and on Tumblr. We are part of a larger group of people–Alondra Nelson, Tara McPherson, Anna Everett, Lisa Nakamura, David Golumbia, Amy Earhart, the #TransformDH collective (including Anne Cong-Huyen, Amanda Phillips, Moya Bailey, Fiona Barnett and more), Alan Liu and Natalia Cecire–who have challenged the digital humanities to explore cultural exclusions and alternative genealogies of the field more deeply.

For example, in the following comic, we expressed one of the key reasons for the existence of the postcolonial digital humanities. As the newly emergent fields of Critical Code Studies, Software Studies and Platform Studies suggest, discourses of computing are implicated in and influence what we receive as ethnic, cultural, racial and gendered norms. We argue that to consider the digital world as something independent of the cultural realm is problematic, and that the relationship between the digital and the cultural needs to be urgently addressed on a global scale.

And in the comics below, we articulated some of the reasons technologists need humanists, and humanists need to intervene in technology: because technology is rapidly evolving to create new modes of understanding which can either be actively used against marginalized peoples or for their benefit.

Play and the Postcolonial Digital Humanities

In our efforts to think through what the postcolonial digital humanities means, we take Anne Cong-Huyen’s reading of our tumblr as a space of play to be one of the cornerstones of how we understand this new field. In his essay “The Location of Brazil,” Salman Rushdie argues that the Brazil of Terry Gilliam’s film of the same name is not located in South America but in the realm of imagination, in song and cinema. For Rushdie, play is the work of the artist, the poet, the writer, the dramaturg–because by playing, one reinvents the world.

We want to reinvent new possibilities for scholarship by playing with the intersections between postcolonial studies, commonly characterized as a serious, alienating interdisciplinary intellectual field, and digital culture. In Rushdie’s essay, Brazil exists in a space of play that challenges the relationship between the “real” world and the imagined world. Yet, the “real” world itself itself is a product of the imagination, a construct through which we make meaning. Such meaning, as Rushdie reminds us in “Imaginary Homelands,” is “a shaky edifice we build out of scraps, dogmas, childhood injuries, newspapers, articles, chance remarks, old films, small victories, people hated, people loved.” He goes on to say, “Perhaps it is because of our sense of what is the case is constructed from such inadequate materials that we defend it fiercely, even to the death.”

Our first initiative involving meaning and play is the Rewriting Wikipedia Project. Last Friday, we participated in the #TooFEW Feminists Engage Wikipedia event aimed at organizing women and people of color to edit Wikipedia. This event raised public awareness of the constructedness of knowledge disseminated on Wikipedia, and led to concrete results as we pooled collective knowledge from scholars at ThatCamp Feminisms East, South, and West, along with a virtual group of editors. We continue this worthwhile effort with the Rewriting Wikipedia Project, which encourages participants to edit Wikipedia to include more entries by and about people of color around the world, and on subjects which are generally excluded by US and European media outlets.

We once joked that holding a THATCamp Postcolonial would be nothing more than three “dhpoco-ers” sitting in a room talking to each other.  We hope that the Postcolonial Digital Humanities website will invite you to join us in this play, so there could be more than three people discussing this subject in the same room.